Exodus Preaching is the first of its kind. It is an exploration of the African American prophetic rhetorical traditions in a manner that makes features of these traditions relevant to a broad audience beyond the African American traditions. It provides readers a composite picture of the nature, meaning, and relevance of prophetic preaching as spoken Word of justice and hope in a society of growing pluralism and the world-shaping phenomenon of racial, economic and cultural diversity.

African American preachers have distinctively invested great symbolic significance in the Exodus story, the messianic witness of Jesus, and the prophetic literature for developing and shaping prophetic sermons. Kenyatta Gilbert demonstrates how four distinctive features of discourse can shape sermon preparation, for effective preaching in a period of intense social change, racial unrest, and violence.

Gilbert includes dozens of practical suggestions and five practical exercises to equip the reader for preaching in new ways and in new environments.  He offers an holistic approach, fully equipping the reader with the theological and practical resources needed to preach prophetically. 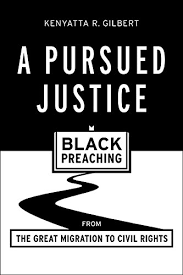 The narrative of Civil Rights often begins with the prophetic figure of Martin Luther King Jr. in the 1960s. City squares became a church, the body politic a congregation, and sermons a jeremiad of social change—or so the story goes. In A Pursued Justice, Kenyatta Gilbert instead traces the roots of King’s call for justice to African American prophetic preaching that arose in an earlier moment of American history.

In the wake of a failed Reconstruction period, widespread agricultural depression, and the rise of Jim Crow laws, and triggered by America’s entry into World War I, a flood of southern Blacks move d from the South to the urban centers of the North. This Great Migration transformed northern Black churches and produced a new mode of preaching—prophetic Black preaching—which sought to address this brand new context.

Black clerics such as Baptist pastor Reverend Adam Clayton Powell Sr., A.M.E. Bishop Reverdy Cassius Ransom, and A.M.E. Zion pastor Reverend Florence Spearing Randolph rose up within these congregations. From their pulpits, these pastors “spoke truth to power” for hope across racial, ethnic, and class lines both within their congregations and between the Black community and the wider culture.

A Pursued Justice profiles these three ecclesiastically inventive clerics of the first half of the twentieth century whose strident voices gave birth to a distinctive form of prophetic preaching. Their radical sermonic response to injustice and suffering, both in and out of the Black church, not only captured the imaginations of participants in the largest internal mass migration in American history but also inspired the homiletical vision of Martin Luther King Jr. and subsequent generations of preachers of revolutionary hope and holy disobedience. 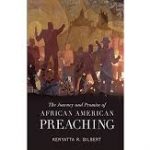 African American congregations have long been celebrated as a locus for powerful, prophetic preaching, but at its best they have also embraced a strong pastoral and wisdom dimension as well, what Kenyatta Gilbert calls a “trivocal impulse.” Yet African American preaching today is more threatened than ever imagined and must now overcome its own apparent irrelevance in an increasingly pluralistic, postmodern age of intense spiritual and social crisis.

The late Rev. Robert Lewis Gilbert was the first African American graduate of Baylor University, graduating with a B.A. degree in 1967. He was referred to as “Little Giant” by family members due to his small stature yet enormous heart and passion for justice. He was the first black teacher assigned to a formerly all-white public school in Waco. A well-known civil rights leader in Central Texas, Gilbert served as pastor at Carver Baptist Church–a congregation that grew over 500% under his leadership. In 1980, he was named Citizen of Texas and in 1992 he received Waco’s Outstanding Humanitarian Award. No Excuses Accepted highlights Gilbert’s journey as a courageous spiritual leader. Having struggled with a severe case of rheumatoid arthritis since the age of 14, Gilbert was known as a fighter. As he states in No Excuses Accepted, “God says, You can! God says you can do anything. There is nothing on this earth strong enough to hold you back…my life has tested the limits of God’s strength and power.”

AGENT M and THE TRIP TO EASTBARROW MOUNTAINS

Shy 11-year old Golden Key Protection Agency cadet Meadow Lotus Seaborn is on a top-secret mission to Rosecliff City, Eastbarrrow, where her Grandma Mabel lives. With a golden key logger and audio recorder device in her tote bag, she hurriedly leaves “The Big Apple” after an army of rival secret agents invades Manhattan. Meadow misses the big city, but once in Eastbarrow she finds herself quickly befriending Meriweather, Bella, Akime, and McKenna at the prestigious Pacific Bell Academy. Then things really get interesting when she meets her no nonsense English teacher Mr. Chanthavong. All she knows is that there’s something very strange going on.
Nine-year old Ella J. Gilbert loves reading and creative writing, plays piano and violin, and of course, enjoys living in Animal Jam’s world of Jamaa. She lives with her parents and two sisters in Silver Spring, MD. Agent M and The Trip to Eastbarrow Mountains is her first book.

SHE HEARS THE OCEAN

Five-year-old Fern Riverly lives an adventurous life with her venturous grandmother, Grams. However, young Fern’s life is turned upside down, when the unexpected occurs. Shocked, wistful Fern is overcome with grief, her summer changing from bright to sorrowful. Certain that this unexpected event is her fault, Fern roams toward the water to blame it for her losses. Will Fern, now eleven, realize that her life will go on, or continue to accuse the ocean for her dilemmas? Throughout your reading of this story, you will learn the past of Fern and Grams, as well as witness her present-day life.

About the Author:  Ten-year-old author Ella Gilbert loves reading, creative writing, and piano. She has won 4,567 Newberry Honors (just kidding). She lives with her parents and two sisters in Silver Spring, MD. This is her second book.